Stone Matrix Asphalt or SMA mixtures are typically used as a surface mix or intermediate layer in the pavement structure on high volume (or high demand) roadways. The standard SMA mixture contains PG 76-22 and fibers, and is recommended for the vast majority of applications where SMA is used or desired and when placed as an overlay on a pavement that has a high amount of cracking.

SMA mixtures provide both excellent rut resistance and crack resistance. SMA mixtures have a high concentration of coarse aggregate, which facilitates stone on stone contact. The voids in the coarse aggregate skeleton are filled with fibers, mineral filler, and a relatively high amount (6` minimum) of polymer modified asphalt. This combination of materials allows for a “rich” mixture that is resistant to cracking while at the same time being highly resistant to rutting. SMA mixtures are considered to be relatively impermeable, particularly when compared Stone Matrix Asphalt ITEM 346 to performance design mixtures. SMA mixtures result in a pavement layer that has a high degree of surface texture which is beneficial in terms of wet weather traction.

SMA mixes are usually an intermediate layer with PFC placed as the surface layer, although they work excellently as surface courses. SMA contains higher oil contents and requires higher quality aggregates which tend to increase the costs when compared to dense graded mixes. 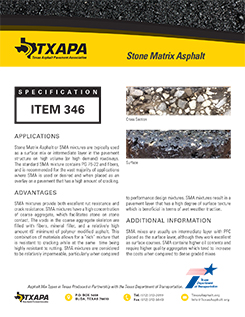